I set out to make a time lapse video covering a year of foliage changes in the garden of the apartment block where I live. I used a Raspberry Pi with a camera module.

This post details the making of the video, mostly for me to have a record of the commands and settings I used.

Its vitally important that the camera module doesn’t move at all over the course of the time lapse. For this, I made an enclosure for the Pi to be installed in the window aperture. The camera module is positioned behind a hole in the side. 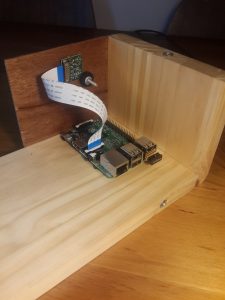 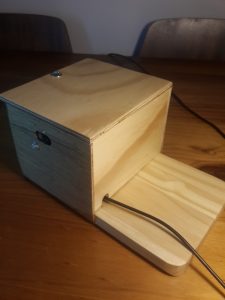 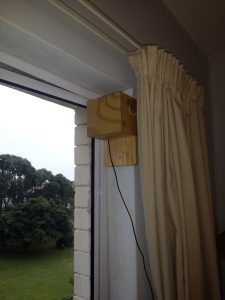 I wanted the Pi connected to my home WiFi network in order to communicate with it, and for it to be internet enabled for progress emails. I used a WiFi dongle for this and mostly just followed the instructions here: Automatically Connect a Raspberry Pi to a Wifi Network

The built-in raspistill command is used. Support for the camera module is enabled when the Pi is first setup with raspi-config.

The script that takes the photo looks like this:

This takes a photo and stores it in an images directory with a filename formatted with the date and time of the image.

Make thumbnails of the daily photos

I wanted a daily email of thumbnails of the photos taken. Part of the imagemagick suite of tools is convert which does this.

Here, a set of photos is stripped of anything redundant, reduced in size, sequenced top-to-bottom and a copy stored in another directory.

Backup the daily photos to a USB drive

Just in case anything went wrong I wanted a backup copy of the photos. For this I used a USB drive permanently inserted into the Pi and used rsync as the easiest way to copy only new files.

Here, if the destination is not already a mount point, the drive will be mounted. Then the contents of the images directory gets rsync‘ed to the mounted drive. The drive will stay mounted until the Pi is switched off.

With each photo being about 4.5Mb, 6 photos a day for a year would lead to running out of space both on the Pi’s internal storage as well as the USB backup drive. So I wanted to determine daily the current disk usage. The df command was used.

Here, the human readable output is sent to a local file for a later scheduled email.

Periodically I would then manually ssh in and copy the images to another computer and free up space on the Pi and the USB drive.

I wanted the day’s thumbnails emailed to me everyday as confirmation that it’s all working correctly. ssmtp does the emailing and mpack enables attachments to emails.

Here the body of the email is made from the contents of the file df.txt, described above, and the attachment is the thumbnail image, having a filename formatted with today’s date.

Putting it all together into cronjobs gave me a crontab listing as follows:

Here, a photo is taken on the hour and half-hour between 12pm and 2.30pm. At 3pm a thumbnail would be made, at 3.15pm the backup would be made on the USB drive. The current disk usage would be saved to file a minute before being sent as an email together with the thumbnail as an attachment.

Merge into a video

After a year of the above I had all the needed photos. To accumulate images into a video I used ffmpeg, this time on a Linux VirtualBox instance.

Here, the images with filenames starting with identifier 1 are stitched together with a frame rate of 15, a 1280×960 size and x264 encoding and sent to an output .mp4 file.

Post-processing won’t help, it’s not the contrast or brightness at fault, it’s the lack of shadows. I thought there’d be sufficient variation in the six photos each day for me to choose the brightest one, but typically if there are no tree shadows in one photo, there won’t be any in others of that day.

One thought on “365 day time lapse with a raspberry pi”